A lot of cool news to report on FNIStash!

After successfully pulling png icons out of the TL2 game data, the next step was to get a GUI going.  As I’ve written about previously, GUIs on Haskell (especially windows) are a PITA.  However, after doing a clean reinstall of Haskell Platform, I was able to successfully install Ji and build the example executables.

The GUI landscape on Haskell is pretty bad.  There are lots of frameworks out there, but actually installing them (much less using them) is often a big pain.  There really hasn’t been much effort lately to make these frameworks more user friendly.

Where does Haskell get a lot of attention?  The Web.  Ji is a package that takes advantage of this web attention by turning your web browser into desktop GUI.  You control the browser GUI from your Haskell application with commands to add elements, handle events, etc.  Ji achieves this by running a Javascript library on your page that transparently communicates with the Haskell server using JSON to execute commands and send event notifications.  The low latency of a desktop connection to itself makes this feasible, but technically Ji could be used for web apps that have a sufficiently fast connection (probably not a good idea, though).  It’s all automatic and requires very little set up.

For FNIStash, I needed to expand on the Ji package by enabling assignment of element IDs and lookups thereof.  I found that most of the infrastructure for this was already there but unused, which made adding the functionality pretty easy once I figured out how the package worked.  The updates went into Ji earlier this morning, but  Ji’s creator, Chris Done, has other things on his plate and wanted to unload responsibility for the package.  Heinrich Apfelmus, of reactive-banana FRP fame, volunteered to take the project over with my assistance.  That transition is still in the works.

I recently discovered how TL2 stores the location information for items.  There is a hierarchical system of containers, slots, and indices, each of which has an ID to keep track of it all.  From a raw item binary, I now know where that item is among TL2’s various item containers.  The result? 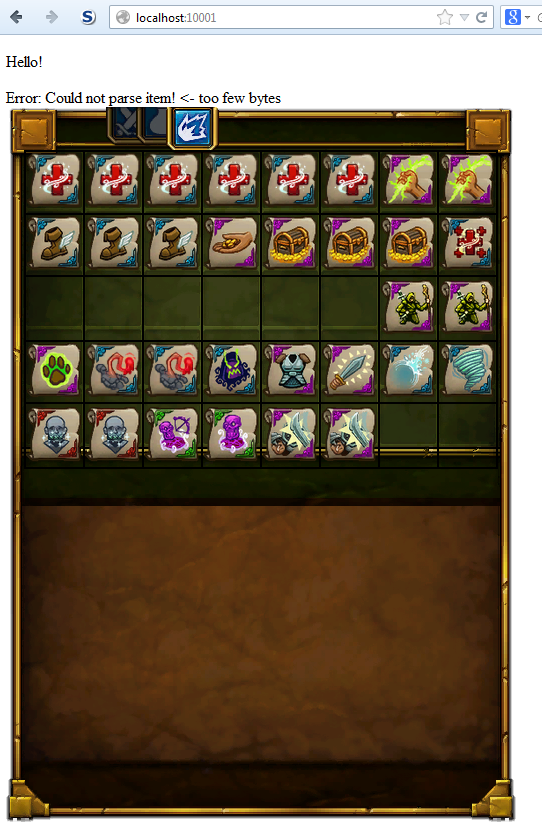 This is a working shared stash display, albeit unpolished.  Each item is inserted into the emulated stash in its same position just like the game.  The selection tabs at the top work, so clicking on a different tab changes the class of items that are displayed.  Ji handles this all over the wire, although I admit is was a little tricky getting the click event handler written.

The error at the top indicates that there are some items in this shared stash file that I am not parsing correctly.  It’s true that there are cases my parsing logic doesn’t currently handle, mainly because I don’t understand the file format entirely.  For the time being, handling most cases is sufficient for moving development forward.

I recently got back to working on FNIStash in Haskell after some diversion into F#, and I had a great breakthrough in developing yesterday.  I successfully installed the Codec-Image-Devil package of bindings to the DevIL image library, which I then used to read the DDS files that are archived in TL2’s PAK archive.  For each one of these DDS files there also exists and IMAGESET (XML) file that defines the name and location of each icon in the DDS file.  Using this information, I wrote out each icon to disk as a PNG file.  My goal is that eventually these will be hosted through an HTML interface to simulate the TL2 stash.

I was somewhat selective about the icons I wrote to disk, and I still got out nearly 1000 icons.  Here are a few:

In my last post, I wrote about my frustrations as a Haskell user on Windows.  It led to a good discussion on Reddit about a number of points I raised, as well as some good comments on this site.  I received more than one recommendation to try out F# as an alternative to Haskell.  I’ve been casually exploring it for a few weeks now, and I have decided not to pursue it.  My impressions are below.  Keep in mind that I am coming to F# as a barely experienced Haskell user, but a Haskell user nonetheless.  My impressions are also restricted to F# in Windows, as I did not investigate Mono or other Unix tools.

Full citizen status – Most immediately noticeable when coming to F# from Haskell is that Windows users come first.  You do not need to install any Unixy tool chains to build what you want.  In fact, almost everything you could possibly want is downloadable straight from Microsoft’s enormous and comprehensive .Net framework.  Everything just works.

Documentation – Being part of the .Net framework, F# has a lot of corporate resources behind it at MS.  This includes in depth documentation about nearly every .Net component.  What is more, the .Net community is enormous, so finding examples online for pretty much anything is much easier than it is for Haskell.

Advanced tooling – One of the things Haskell suffers from, in my opinion, is lack of advanced development tools, including a standard and full-featured IDE.  In F#, you get Visual Studio, a fully featured IDE that has been tested by thousands, if not millions.  Haskell has no equivalent.  Leksah is decent, but it is nowhere near as capable as VS.

For example, in F# on VS you can scroll over (almost) any value or function and see the inferred type signature for it.  In Haskell, if I have a tough type error, I usually have to start explicitly defining the types of values and functions to narrow down the scope of my mistake.  In VS, I can just scroll over the item in question and immediately get hints as to where I went wrong.  Unfortunately, as far as I know this only works for named functions and not functions defined as symbols (operators).

Sane strings – Haskell’s default implementation of strings is a linked list of characters.  While providing some advantages, in most cases it’s plain inefficient and unusable.  GHC has some extensions to help fix this, such as the OverloadedStrings extension, and there are libraries to help as well, such as the text library.  But different libraries choose to handle strings in different ways, so you often find yourself calling a number of conversion operations just to glue all the right types together.  F#, on the other hand, has one standard string implementation that everyone uses.

Standards – Somewhat similar to the previous point, the Haskell ecosystem sometimes feels like the wild west, with different projects experimenting with types and strategies.  Frequently, this can lead to ambiguity in how a newbie should approach a particular problem.  In F#, there is usually a standard, recommended way to do things – the .Net way.

Computation expressions – This is a feature in F# similar to monads that is in some ways less powerful (see below) and in some ways more powerful.  Like do notation, CE’s are syntactic sugar for monad-like operations.  The familiar Bind and Return are present, like Haskell, but F# allows additional desugaring of loop expressions, the ability to implement lazy evaluation, and more.

No lazy evaluation (unless you want it) – Arguably a con overall, but my point here is that reasoning about performance and space usage is easier in F# due to strict evaluation semantics.  The profiling utilities built into VS make this even easier still.

Verbose and odd syntax – A number of aspects of F# rub me the wrong way.

First, every declaration requires a let keyword.  Let let let let let.  Haskell in a lot of ways is much more concise because several values can be declared using one let.

Secondly (and this drives me nuts), F# function and type declarations must be made before the function is used.  In Haskell, I often use a few helper functions that are defined down near the bottom of the file, but in F# those helpers must be defined near the top of else they can’t be used.  Having such an antiquated restriction as this in a language a modern as F# boggles my mind.

Thirdly, the declaration of types and their constructors is sometimes not consistent.  For instance, a constructed tuple in F# is (a,b) (like Haskell), but the type of this tuple is c * d.  It’s not a hard thing to get over, but it does accentuate how self-consistent Haskell is.

No type classes! – I put an exclamation point on this one because it might be the single most important reason F# left a bad taste in my mouth.  I did not realize the power of type classes until I tried to do functional programming without them.  Take for example the monad type class.  If a type is an instance of the monad type class, it is a given that it will work with replicateM, sequence, and a number of other functions that work on monads.  If you have a new type, just declare a monad instance for it and sequence will work with it as well.

Trying to do this in F# is an exercise in frustration.  There are ways to simulate type classes, but you have to do all kinds of inlining and type gymnastics to make the .Net CLR happy.  Since it’s not readily supported by the language, there is no standard library of monad functions, and in a lot of situations you’ll have to reimplement these extraordinarily useful utilities yourself.  This can lead to a good deal of code duplication.  Just check out the FSharpx monad library code for examples.

Dependence on .Net – .Net is a comprehensive, full-featured framework, but it is huge and designed for OO languages.  This results in classes like Stream, StreamReader, BinaryReader, TextReader, etc., which are all slight variations on each other.  F# uses these same classes.  Digging through the docs to find what you need can be challenge, but less so if you’re already familiar with .Net.  In Haskell though, almost all of these can be replaced by mapping to/from a plain old byte string.  Why does OO have so much seemingly unnecessary complexity to simply deserialize a type?

“Functional first” – F# is often described as a “functional first” language, meaning it supports both functional and OO programming paradigms.  For some this is a plus (right tool for the right job and all that), but to me it seems like F# suffers from split personality disorder.  Some of the F# libraries feel like little more than functional wrappers around an OO core.  For a newbie, it’s not entire clear if these are merely measures of convenience or of necessity.

I doubt I was able to completely commit my thoughts on F# to this page, but this is at least a good start.  I’ve decided to continue to wrestle with Haskell on Windows because even though the ecosystem is a house of cards, actually coding in Haskell is much more enjoyable than F#.  I’ve started over with Haskell Platform to hopefully resolve as many compatibility issues as i can.